Part of: The first public hydrogen station in Belgium 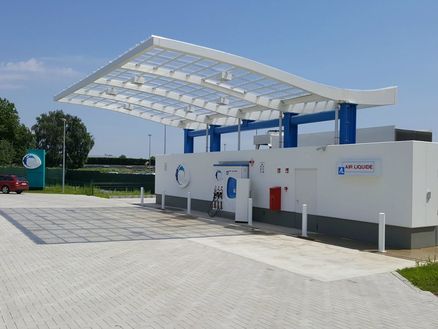 The station, for which Sweco Belgium carried out the engineering, was built on a site made available by Toyota Motor Europe. It makes it possible to connect Belgium to the European hydrogen network. This means the start of hydrogen as a clean energy source in Belgium.

The hydrogen is produced by electrolysis, a process without CO2 emissions. This fits well with the Blue Hydrogen development strategy of Air Liquide. Between 30 and 40 runs per day can be performed in less than five minutes, which means an average of 500 driven kilometres.

As a pioneer in the hydrogen energy sector, Air Liquide actively contributes to the development of the hydrogen chain and helps the company meet the challenge of the energy transition. This commitment is clearly demonstrated by the roll-out of hydrogen charging stations, both for vehicles and for forklifts and other means of transport

Mourik n.v.
mourik@mourik.be
+32-3-542 20 40
View all contact details
To overview
Mourik and third parties use functional, analytical and social media cookies or similar techniques. We do this in order to offer you an optimal experience and to analyze and improve the service of Mourik and third parties. Our partners in the field of analytics and social media have access to your use of our site. See our privacy statement and our cookie policy for more information. By clicking on accept, you agree.
Reject Accept